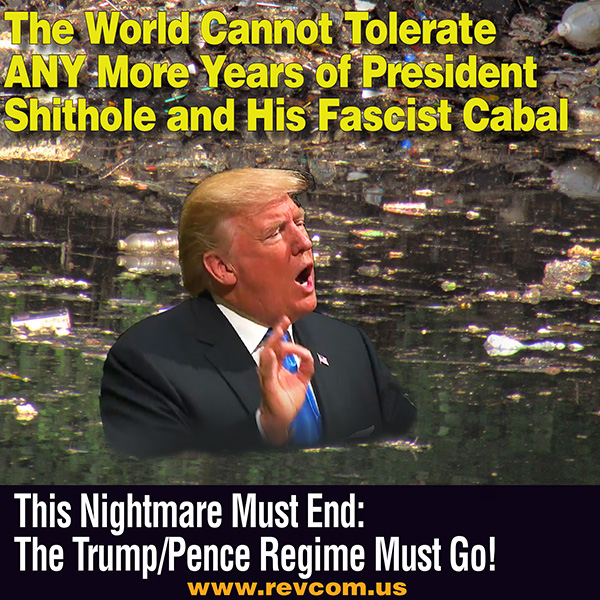 On January 11, Donald Trump, the Piece of Shit of the U.S. (hereafter, “POSTUS”), came full out of his KKK closet in a room full of congressmen and aides, demanding to know why the U.S. should accept immigrants from “shithole countries” like Haiti, El Salvador, and the whole continent of Africa. POSTUS said the U.S. needs immigrants from countries like overwhelmingly white Norway. Referring to the hundreds of thousands of Haitians in the U.S., Trump said, “Take them out!”

All this was no “slip.” No, this is “the new normal” Americans are supposed to accept—and by the way, you ARE accepting if you are not raising holy hell about it.

According to Democratic Senator Dick Durbin, POSTUS used this language repeatedly as part of laying out his position on immigrants and immigration. No one in the room clearly denied that he said this. A White House spokesman bragged that these remarks showed that POSTUS “will always fight for the American people,” and unnamed sources in the White House said the comments would “resonate” with his base. And, while some have criticized his “vulgarity,” almost the entire Republican Party has closed ranks around the content of what POSTUS said.

This is Nazi shit—this is dividing up humanity into racial categories and saying some of them aren’t human. Period. And under this “logic,” the fascists won’t even stop with driving out immigrants from these “shithole countries,” but will go after their U.S.-born descendants as well.

The Trump/Pence regime is already enacting the policies that are racing down that road. It is throwing out 260,000 Salvadorans and 60,000 Haitians here under TPS (Temporary Protected Status, granted in the face of catastrophic conditions in their homelands). For many of these people, going back to those countries, devastated because of decades of what the U.S. has done, is a death sentence. And it is threatening to end protection for 800,000 mainly Latino “Dreamers” in the DACA program (people who came to the U.S. with their undocumented parents and have grown up and sunk roots in the U.S.). The Department of Homeland Security (DHS) is cranking up deportations and building “detention centers” as fast as it can. POSTUS pardoned Sheriff Joe Arpaio, who was in trouble with the courts because he profiled, harassed, brutalized and detained all people of Mexican-American descent, even if they were born in the USA. And POSTUS is already treating Puerto Rico and the U.S. Virgin Islands like they are not part of the U.S., at the cost of tremendous suffering.

And this is also a message to the racist mob that is the hard-core base of this regime—it is normalizing the dehumanization of Black and Brown people, turning their families and communities into—in the eyes of the regime’s followers—an “infestation” that is “destroying America.”

This is the outlook that leads to pogroms, to lynchings, to massacres, to holocausts.

If you say “It can’t happen here” when it fucking IS happening here, then objectively, regardless of your wishes or intentions, you are complicit in it happening. And it is not going to get easier to stand up against this if you wait and do nothing.

And speaking of the Democrats! What the fuck!?!?

Dick Durbin is a prominent, supposedly liberal and principled Democratic senator. And yes, after the meeting he publicly denounced Trump’s racism.

But the real question is, why was he even in the room with POSTUS and these other virulent anti-immigrant fanatics to hear this ugly ranting in the first place? And why didn’t he stand up and walk the fuck out when POSTUS said this shit the first time?

Because he was trying to “make a deal” on immigration. Durbin was offering to “trade”: money for the fascists’ Wall against Mexico and “discussion” about ending so-called “chain migration,”1 for a temporary reprieve for the Dreamers. (And by the way, the Dreamers themselves have made clear that they do NOT want to be the bait in such a deal, that they are not going to betray their families, their relatives, their principles, for a momentary reprieve from deportation.) This would amount to a “deal” to facilitate and smooth over the rough edges of ethnic cleansing. Once over this rough patch, the fascists would undoubtedly turn around and deport the Dreamers as well.

Durbin, along with Schumer, Pelosi, Sanders, Warren and all the major Democratic figures, are collaborators with this regime2 , and they showed it in their reaction to this watershed moment. Confronted with the undeniable reality that a white supremacist regime holds power, they doubled down on their “willingness to seek common ground,” on their position of keeping impeachment “off the table,” and their determination to funnel all the anger, outrage and fear of the majority of the population into “voting Democratic” in 2018, 2020, 2022... ad infinitum, ad nauseam.

The Democrats are the “escape valve” for the simmering mass hatred of this regime, diverting people from the kind of mass outpourings in the streets that are urgently necessary and possible to DRIVE THIS REGIME OUT, and into electoral dead ends. In return, maybe some immigrant children will get a pat on the head while their parents are being dragged away and deported... before they themselves are deported!

So... what about YOU? If you fell for, or convinced yourself to put up with this bullshit once, or twice, or a hundred times, you don’t have to do it again. It’s time to wake up: there is something deeply wrong with failing to confront reality when it is staring you in the face—the reality that relying on the Democrats is an utterly bankrupt strategy for stopping Trump and these unfolding horrors. This system will not correct itself without ordinary people stepping outside of the “normal channels.”

Things have reached the point where ALL people of conscience MUST go into the streets and say BASTA YA! No More! This Regime Must Get The Fuck OUT!

Right now, RefuseFascism.org is organizing people to do exactly that. Get with them! Join them!

1. “Chain migration” is the fascists’ insulting term for the process where foreign-born U.S. citizens can—horrors!—sponsor their parents, grandparents, children to come here as well. [back]

2. A number of Black and Brown Democratic officials have strongly denounced Trump as a racist, but these are figures with no real power or influence on the national Democratic Party. [back]