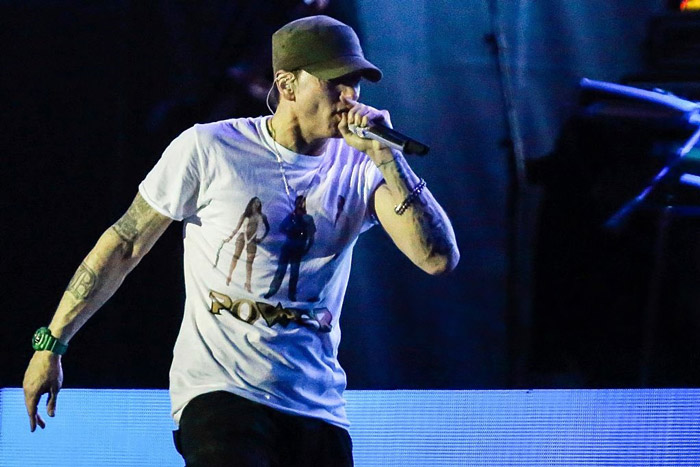 Eminem is the latest artist to voice his displeasure with President Donald Trump’s administration. The outspoken wordsmith declared his anti-Trump stance during his Bellahouston Park concert in Scotland on Thursday (Aug. 24).

“Ladies and gentlemen, Scotland might have to be our new home, because right now, shit ain’t going too well in the States,” he said. “I just want to take this moment right now to say motherfuck Donald Trump.”

Donning a “Fuck Trump” T-shirt, Slim Shady went on to perform “White America” off 2002’s The Eminem Show, which was crafted while President George W. Bush was the nation’s commander-in-chief.

“I must’ve struck a chord with somebody up in the office / ‘Cause Congress keeps tellin’ me I ain’t causin’ nothin’ but problems,” he raps on the track. “And now they’re sayin’ I’m in trouble with the government / I’m lovin’ it / I shoveled shit all my life, and now I’m dumpin’ it / On white America.”

In October 2016, Em rapped about dunking then-candidate Trump supporters under water on “Campaign Speech,” in which he also rhymes about the current president. “You say Trump don’t kiss ass like a puppet ’cause he runs his campaign with his own cash for the fundin’,” he raps. “And that’s what you wanted / A fuckin’ loose cannon who’s blunt with his hand on the button / Who doesn’t have to answer to no one? Great idea!”

A few months later, Em came back with more fury on Big Sean’s “No Favors.” “I’m anti, can’t no government handle a commando,” he rapped. “Your man don’t want it, Trump’s a bitch I’ll make his whole brand go under.”

Eminem’s political opinions have been documented throughout his career. In between the Bush and Trump administrations, he praised President Barack Obama. “Obama’s great,” he said at one point. “I love Obama. I voted for Obama. Obama is giving people hope.” Last year, President Obama revealed that the admiration was mutual, when he got amped for his Democratic National Convention speech by listening to 8 Mile’s “Loose Yourself.”

Eminem, who is reportedly planning to release a new album this fall, isn’t the first rapper to bash Trump. Kendrick Lamar, YG, Nas, Mac Miller, Snoop Dogg, G-Eazy, and T.I. have all done the same.