L.A. County sheriff's deputy is charged with selling drugs and offering to hire other cops to protect dealers 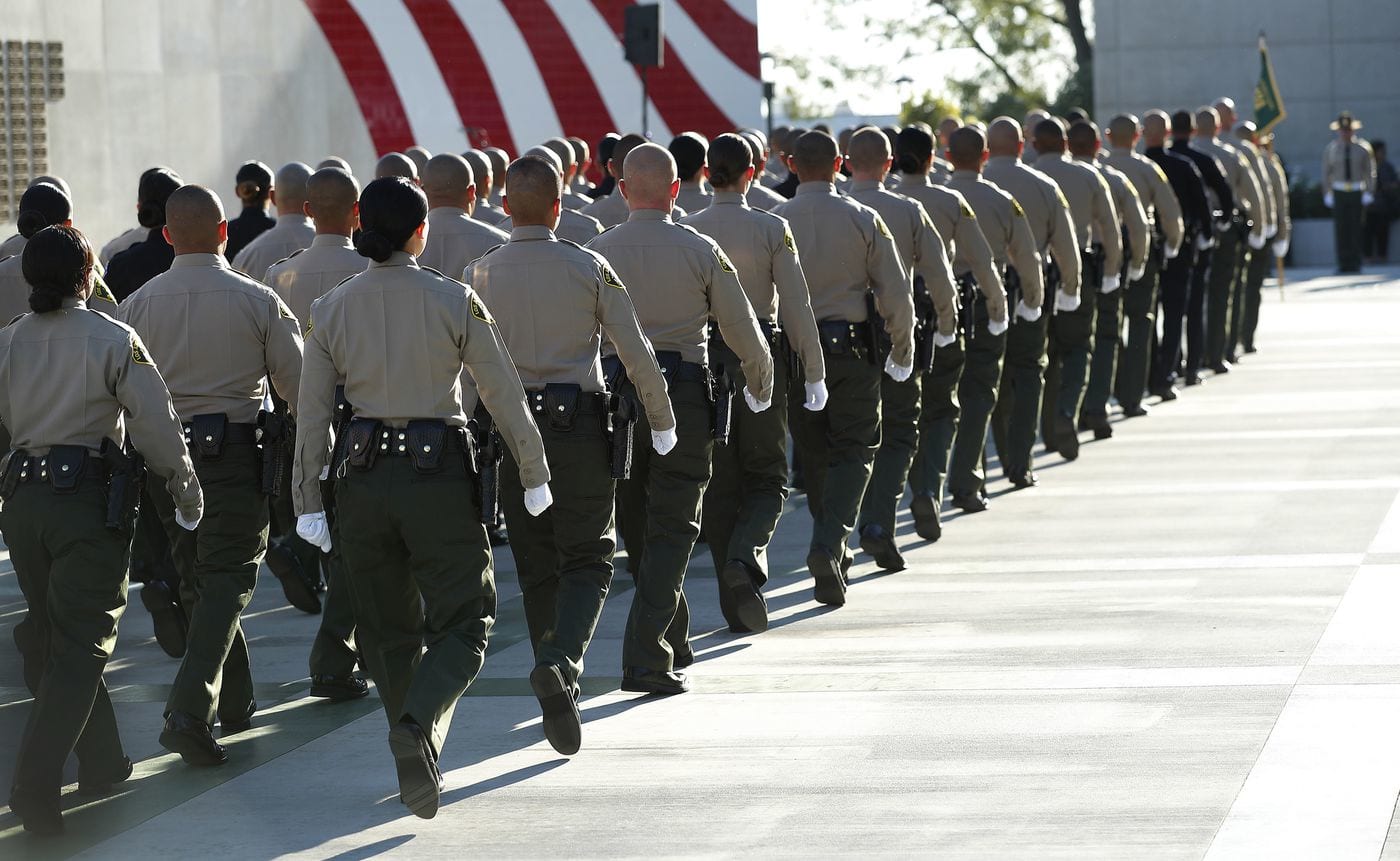 An L.A. County sheriff’s deputy has been charged with operating a large-scale drug trafficking operation in which he said that he had other law enforcement officers on his payroll, federal authorities allege. (Mel Melcon / Los Angeles Times)

A Los Angeles County sheriff's deputy has been charged with operating a large-scale drug trafficking scheme in which he boasted that he hired other law enforcement officers to provide security to dealers and could assault people for his clients, according to court records.

Deputy Kenneth Collins and three other men were arrested by FBI agents Tuesday morning in a sting operation when they arrived to what they thought was a drug deal, according to records unsealed after the arrest.

Court documents outlining the case show that Collins, 50, has been under investigation for months. He was recorded by agents discussing "his extensive drug trafficking network, past criminal conduct, and willingness to accept bribes to use his law enforcement status for criminal purposes," according to a criminal complaint filed in U.S. District Court.

"I fix problems," Collins was recorded saying to an undercover agent, court records show. "I make a lot of things go away."

U.S. Atty. Nicola T. Hanna said in a statement that "Deputy Collins sold his badge to assist an individual he thought was a drug trafficker. The deputy allegedly used his status as a law enforcement officer as a guarantee when he promised safe travels for large quantities of illegal narcotics."

Thom Mrozek, a U.S. attorney's office spokesman, said that the investigation is continuing but that no other law enforcement officers had been implicated so far.

Last year, an undercover agent met with Collins while posing as the relative of a wealthy investor looking to finance an illegal marijuana grow house. The deputy offered to provide security and said he had three teams already working in the region, including one that was protecting an illegal marijuana grow house disguised as an auto repair shop, according to the complaint.

At another meeting to discuss the security plan for the grow house, Collins showed off his sheriff's badge and lifted his shirt to show a gun in his waistband, the complaint said.

He later said that he could provide teams of security made up of cops who "travel … with guns" and boasted that he and two comrades were hired by a client to set ablaze an $85,000 Cadillac truck in order to intimidate someone, federal authorities alleged.

Collins sold about 2 pounds of marijuana to the agent for $6,000 as a "test run" to demonstrate his ability to arrange and carry out deals, federal authorities allege. The deputy said he had connections to marijuana operations in Northern California and could sell the agent $4 million of marijuana each month, according to the court records.

His contacts were "the best growers you can find in the north," Collins is alleged to have boasted to the agent.

Undercover agents then hired Collins to provide security while they drove several pounds of methamphetamine and other contraband from Pasadena to Las Vegas, the court records said.

When one of the agents initially balked at the price, Collins explained that his services were worth it:

"We're cops," Collins said, according to the complaint. "We deal with a lot of, you know, kind of high-end clients, and $25,000, they're like, you know, it's like as long as you can make sure my shipment gets from here to there, that's fine. … They make profits in upwards of $5 million on certain, certain transports."

On the drive to Las Vegas, one of the other men charged in the case, David Easter, drove a lookout car while another, Grant Valencia, rode with the undercover agent in the vehicle with the drugs, according to court records. Collins rode in a third car keeping watch from behind.

The methamphetamine the agents were carrying on the trip was not real.

In the complaint, agents said that Collins, Easter and Valencia had agreed to provide security for a large drug transaction Tuesday at the Rosemont Pavilion, an events venue in Pasadena.

In exchange for as much as $250,000, Collins and his team were planning to help oversee the transport of a large cache of drugs and cash, agents alleged in court records. At first, the agent and Collins agreed to a $75,000 payment to oversee the shipment of 20 kilograms of cocaine, 6 kilograms of methamphetamine and cash, but Collins later suggested that they increase the amount of drugs to fill "a moving truck" and upped the price tag for the job, according to an undercover informant cited in the complaint.

Collins said he had a team of six men, including three other law enforcement officers, who could ensure the cargo made it to its destination "untouched, unscathed," the document says.

After a meeting Dec. 11 to plan the transport that was set for Tuesday, Collins called another L.A. County sheriff's deputy to discuss the deal, according to the complaint. The other deputy is not named.

Like Collins, Easter, 51, and Valencia, 34, each face a charge of conspiracy to distribute a controlled substance. Federal authorities did not publicly detail the allegations against the fourth man who was arrested, Maurice Desi Font, 56.

The Sheriff's Department issued a statement saying the agency notified federal authorities about the criminal allegations against Collins several months ago and had been cooperating with the FBI. Collins, a 15-year-department veteran most recently assigned to provide security at county buildings, was placed on leave and would be suspended without pay during the criminal case, the statement said.

In court Thursday afternoon, Collins was denied bail despite his attorney's argument that he posed no risk to the community and that his wife and mother-in-law would put up $115,000 as assurance he would not flee. Except for a drunk driving conviction in 1999, the attorney said, Collins had no criminal past.

Assistant U.S. Atty. Lindsay Greer Dotson rebuffed the idea of bail, repeatedly calling Collins "the mastermind" of the alleged drug operation and saying the deputy had indicated in conversations with agents that he had family in Cuba and had recently traveled to the country.

Wearing a plaid shirt, Collins remained expressionless throughout the proceedings and answered the judge's questions in a monotone voice.

U.S. Magistrate Judge Steve Kim set Easter's bail at $110,000. The other defendants did not seek bail.

Collins has served as an instructor in a life-skills course for former inmates, according to a 2014 article in the San Gabriel Valley Tribune.

The Emerging Leaders Academy, run by a retired sheriff's sergeant, features deputies who act as mentors for people with criminal pasts who want to improve their literacy and career skills in order to stay out of prison.

Valencia also is featured in the Tribune article. He is described as an ex-offender who attended the program at the time Collins was teaching.

Collins was quoted in the article as saying he grew up poor before joining the military and later the Sheriff's Department. He said the cognitive behavior program he went through to be able to teach forced him to change his perception of himself from that of a hardcore deputy who busted down doors and chased guns and dope slingers.

"I was so used to putting my foot on their neck," he was quoted as saying. "This was kind of foreign to me. It goes against what we do — our profession."

A call to the academy was not answered Tuesday morning.