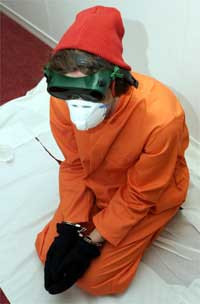 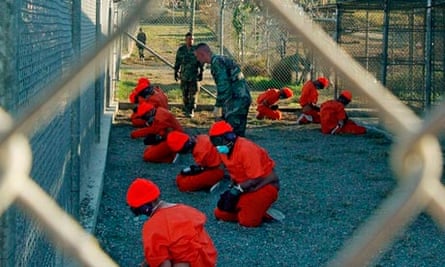 'At first the world was shocked by images of shackled kneeling men in orange jumpsuits wearing face masks, blacked out eye-goggles and industrial ear muffs. Then they were mostly forgotten.' Photograph: Shane T

The hunger strike by our former fellow prisoners at the Guantánamo prison camp should have already been the spur for President Obama to end this shameful saga, which has so lowered US prestige in the world.

It is now in its third month and around two-thirds of the 166 prisoners there are taking part. They are sick and weakened by 11 years of inhumane treatment and have chosen this painful way to gain the world's attention. Eighty-six of these men have been cleared for release by this administration's senior taskforce. Who can justify their continuing imprisonment? This must be ended by President Obama.

Since the opening of the prison camp, numerous prisoners held at Guantánamo have sporadically taken part in hunger strikes to protest their arbitrary imprisonment, treatment and conditions. This, however, is the first time the overwhelming majority of the prisoners are taking part – and for such an extended period.

It will, in a few months, be 12 years since the first prisoners were sent to Guantánamo by the Bush administration to avoid fair treatment and fair trials. At first the world was shocked by the images of shackled kneeling men in orange jumpsuits wearing face masks, blacked out eye-goggles and industrial ear muffs – in order to prevent them from seeing, hearing and speaking. Then they were mostly forgotten.

However, over time their voices did get heard as recurrent and corroborative stories of torture and cruel, inhumane and degrading treatment came out when some of the men who endured it were released. Of the 779 prisoners once held at Guantánamo, 612 have been released – without charge, or apology. We are among these men and it is through our testimony – and that of the prisoners left behind, via their legal teams, – that the voices of those who know the evil of Guantánamo are finally being heard.

Last week, a report by the Constitution Project's Task Force on Detainee Treatment, which included two former senior US generals, and a Republican former congressman and lawyer, Asa Hutchinson, who served as administrator of the Drug Enforcement Agency from 2001 before being appointed in January 2003 as Undersecretary in the biggest division of the Department of Homeland Security, described the practice of torture by the US administration as "indisputable". The report also stated bluntly that the treatment and indefinite detention of the Guantánamo prisoners was "abhorrent and intolerable" and called for the prison camp to be closed by next year. Despite these findings the US administration continues to employ tactics that include:

The abuse of the prisoners' religious rights, such as the desecration of the Qur'an

■ The use of chemical sprays and rubber bullets to "quell unrest"

■ Lack of meaningful communication with relatives

■ Arbitrary imprisonment without charge or trial

The present hunger strikes are a result of the culmination of over a decade of systematic human rights violations and the closing of every legal avenue for release. The appalling methods of force-feeding several of the prisoners in a crude attempt at keeping them alive, by strapping down their arms, legs and heads to a chair and forcing a tube through their nostrils and forcing down liquid food into their stomachs, demonstrates the absence of any morals and principles the US administration may claim to have regarding these men.

President Obama claimed he wanted to close Guantánamo and promised to do so. Four years after his initial promise, he has again acknowledged that Guantanamo is not necessary and must close. Speaking on 30 April 2013, the US president reaffirmed his commitment as it was, "not necessary to keep America safe, it is expensive, it is inefficient … it is a recruitment tool for extremists; it needs to be closed."

We hope that on this occasion, such words are not mere empty rhetoric, but a promise to be realised.

We make the following recommendations:

1 For the American medical profession to stop its complicity with abusive forced feeding techniques.

2 For conditions of confinement for detainees to be improved immediately.

4 That the military commissions process should be ended and all those charged should be tried in line with the Geneva Conventions.